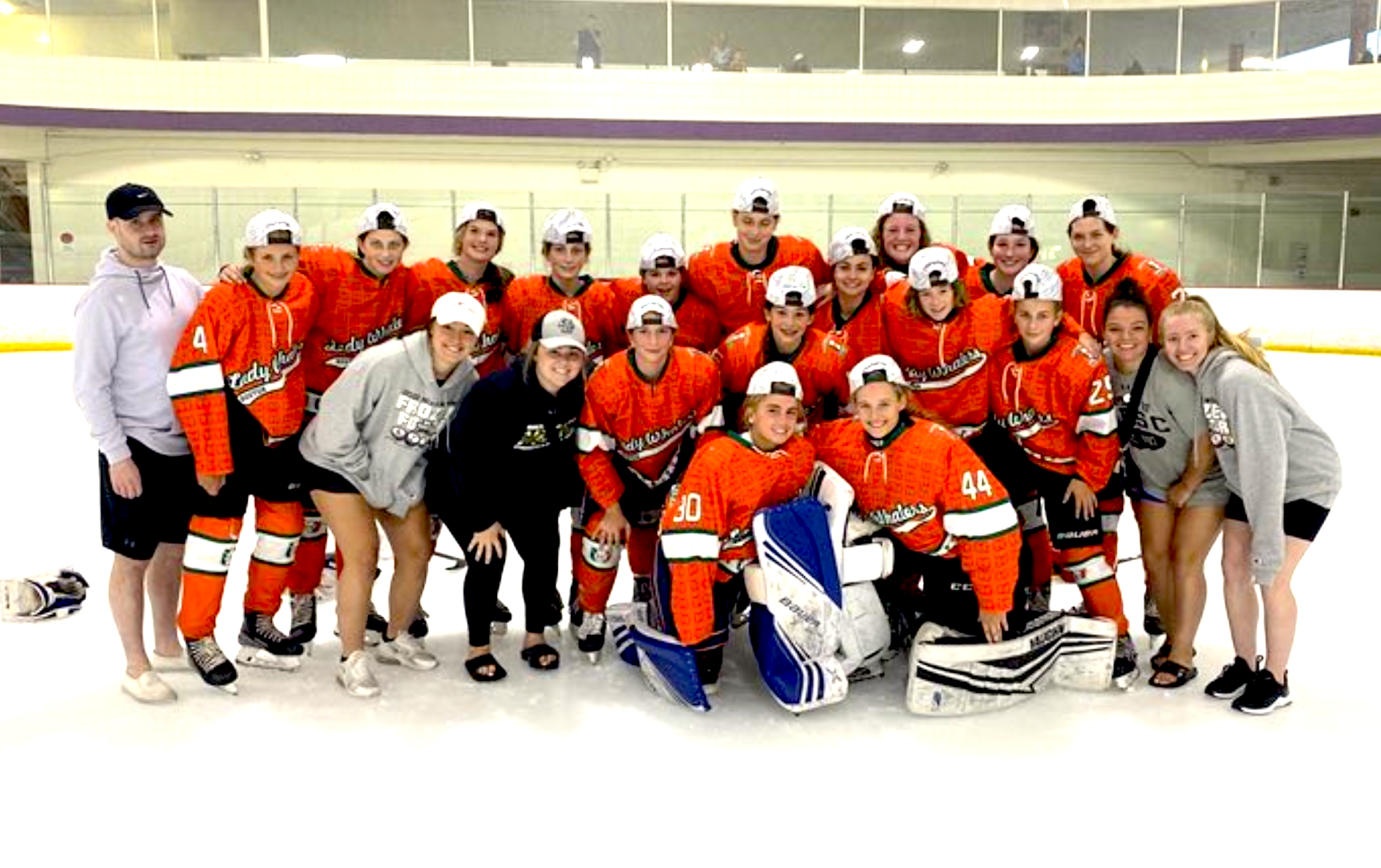 Marlborough, MA -  The Boston Lady Whalers are proud to share that our 2008 National Elite Team was crowned champions of the Beantown Classic 19U Blue Division, after stringing together a perfect 7-0 record this past weekend!  After capturing the crown at the 2008 level in 2019, 2020, and 2021, the girls were eager to challenge themselves and play up 4-5 birth years, against the 19U teams.

The event kicked off on Friday morning where the BLW 2008’s squared off against the Michigan High School All-Stars.  After going down 1-0 just a minute into the game, the girls bared down and scored 11 unanswered goals to emerge victorious with an 11-1 win in the opener.

Friday evening’s game highlighted more of the same – scoring early and often, as the BLW 2008’s cruised past the Rhode Island Sting 19U Tier 1 Team by a score of 9-0, and sat atop the standings of all 25 teams in the 19U Blue Division, and the end of Day 1.

Saturday’s games were both closer than the scoreboard showed, as the BLW 08’s began the day with a 7-0 win over the Connecticut Polar Bears 19U Team.  Leading 1-0 after the first half, the girls scored two powerplay goals early in the second half, and built on that by netting 4 more before the final buzzer.  Saturday evening’s game had proved to be their toughest matchup yet, as they squared off with the Bay State Breakers 19U Tier II.  Cassidy Lobisser put the girls ahead 1-0 at the end of the first half, which was followed up by a pair of goals from Sofia Nardelli early in the second half.  Ontario-native, Nuala Gibbs, sealed the deal by banging home a rebound to close things out with a 4-0 win.  The BLW 2008’s concluded Round Robin with a perfect 4-0 record, with 31 goals for and just 1 goal against, which would be enough to earn them the #1 Seed out of the 25-team pool, and a bye into the Quarter Final Round on Sunday.

After watching the Bay State Breakers defeat Skate to Excellence Minnesota by a score of 3-2 in the 8th Seed vs 9th Seed game, the BLW 2008’s would face off against the Breakers for the second time in a 12-hour span.  The girls came out of the gate hard, scoring a nice powerplay goal off of a Maggie Averill slapshot bomb, with Christina Scalese banging in the rebound.  The Breakers would tie the game at 1-1 with 17:00 to play, but it was Jane Daley off of a beautiful feed that went from Emma Cerruti to Mary Murray, and sent Daley off on a breakaway where she picked her corner and let it rip.  Ava DeCourcey, who played all 5 positions over the course of the weekend, crashed the net hard and wristed a missile over the goalie’s glove with 4:00 left, and it was Sloane Hartmetz who sent Mary Derrenbacher off to the races where she buried an empty netter to seal the game 4-1, and advance the team to the Semi-Finals.

In the Semi-Finals, the girls would go up against a strong and deep Mid-Fairfield Stars 19U Tier II Team that made it a battle right until the end.  The BLW 08’s scored 3:00 into the game off of a beautiful breakout from Hartmetz to Scalese, to Murray, back to Scalese, where she followed her shot and tapped in her own rebound, putting the girls ahead 1-0.  Mid-Fairfield capitalized on their 4th powerplay of the game, netting a breakaway goal with 9:00 to play in the hockey game.  After a pivotal blocked shot by Onna McCarty, it was Kaylee Mandeville who made the diving effort to chip the puck out of the zone, sending Caroline Averill off to the races.  Patient with the puck, Averill froze the defender and put it right on the tape of a streaking Nuala Gibbs who powered the puck over the goalie’s blocker with just 4:15 to play. That goal proved to be the winner.  The girls won by a final score of 2-1 and were off to the Championship Game.

The BLW 2008’s were set to go for a much anticipated battle that they knew would be their toughest test yet.  The girls squared off against a big, strong, and talented Mass Avalanche team full of elite 03’s and 04’s prep school players.  However, that didn't seem to matter as our girls were dialed in on bringing home the Beantown Classic banner for a fourth consecutive year.

“After the first 5 minutes, as a coaching staff we realized that we were outmatched physically”, said Executive Director Michaela Boyle. “But sometimes you can just tell with this group, when they get that look in their eye and bring a relentless forecheck, it didn’t matter who they were lined up against – just as they always do, they found a way” Boyle continued.

With 11:30 to go in the Championship Game, a strong stick-lifting effort by Maggie Averill kept the puck in the zone, and Caroline Averill managed to get past the defender, alone in tight, where her shot deflected left, where Nuala Gibbs took a whack at the rebound, putting the puck right back on the stick of Averill as she buried a backhander to put the girls ahead 1-0.

Less than 20 seconds later, a blocked shot by Ava DeCourcey, and a poke by Caroline Averill sent her on a 2-on-1 with Nuala Gibbs.  Almost identical to the winning goal in the semi-finals, Averill was patient, drew the defender toward her, and put it right on the tape of Gibbs who buried the goal and made the score 2-0.

With roughly 7:00 to go, the forecheck shifted to one forward hard, and the other two high with our defenders, specifically running a trap in the neutral zone, and it prevented the Avalanche from being able to make plays and enter our zone. The defense did a terrific job getting the puck right out of the zone, high and off the glass, and the forwards did a great job of getting pucks deep as the clock ticked away.  The final buzzer rang, and for the fourth consecutive year, this time playing up against girls 4-5 years older than them, the Boston Lady Whalers were crowned 19U Blue Division Beantown Champions.

“To watch the way that these girls buckled down and bought in, and to see the energy that they had on the bench was incredible,” Associate Director Cayla Barnes said. “They were outsized and outmuscled on loose pucks, but their resiliency and active sticks was what made the difference,” Barnes added.

With all of the scoring and solid defense that took place in the Round Robin, what was overlooked was the stellar goaltending tandem of Hannah Mortazavi & Annika Jonas.  The goalies split each game in Round Robin, allowing just one goal in four games. On playoff Sunday they combined for three wins, allowing just two goals, and posting a shutout in the Championship Game.  The goaltenders were the team’s background all weekend, and with the confidence that the forwards had in whoever was in net, it allowed them to take more chances on offense and ultimately score more goals.

A big thanks to our coaching staff, whom were second to none all weekend led by Executive Director Michaela Boyle, Associate Director Cayla Barnes, Liz Schepers (Minnesota Whitecaps PHF), and Lexi Templeman (Toronto Six PHF).

Congratulations to our Boston Lady Whalers 2008 National Elite Team for overcoming countless obstacles, and when the dust cleared, raising the banner as the 2022 Beantown Classic 19U Blue Division Champions!