Blaine, MN - The Boston Lady Whalers program is proud to share that our 2008 Team came away with the gold medal last weekend at the North American Female Elite Showcase in Blaine, MN.  The 08's strung together a perfect 5-0 record, and ran the table all weekend long.

Our program was invited, and accepted, a charter bid to represent the East Coast of the United States Region in the ORION Series - designed to bring together the top players from each pocket of the continent, through the most reputable programs in each area.  We were humbled to be granted the opportunity, and excited for our players.  The event featured thee 20-minute periods with an ice cut in between periods, national anthems, starting lineups, player of the game awards, all-tournament team awards, live broadcast with a professional announcer, player gifts upon arrival - it was truly an experience unlike any we've ever seen before.

Our girls were greeted in Minnesota by the four newest members of our Boston Lady Whalers coaching staff; each of whom were members of the USA Women's Gold Medal-winning team at the 2018 Winter Olympics.

"When we first joined the ORION Series, we sat down to configure the best ways we could make this weekend a truly special one for our players.  When we realized there would be teams coming down from Canada, we had no choice but to seek out these four coaches who know a thing or two about winning the border battle," said Boston Lady Whalers GM, Dana Trivigno.

A special thank you to all four of them - Hannah Brandt, Lee Stecklein, Dani Cameranesi, and Maddie Rooney for their desire to work with our players, and we look forward to working with our new coaches very soon! 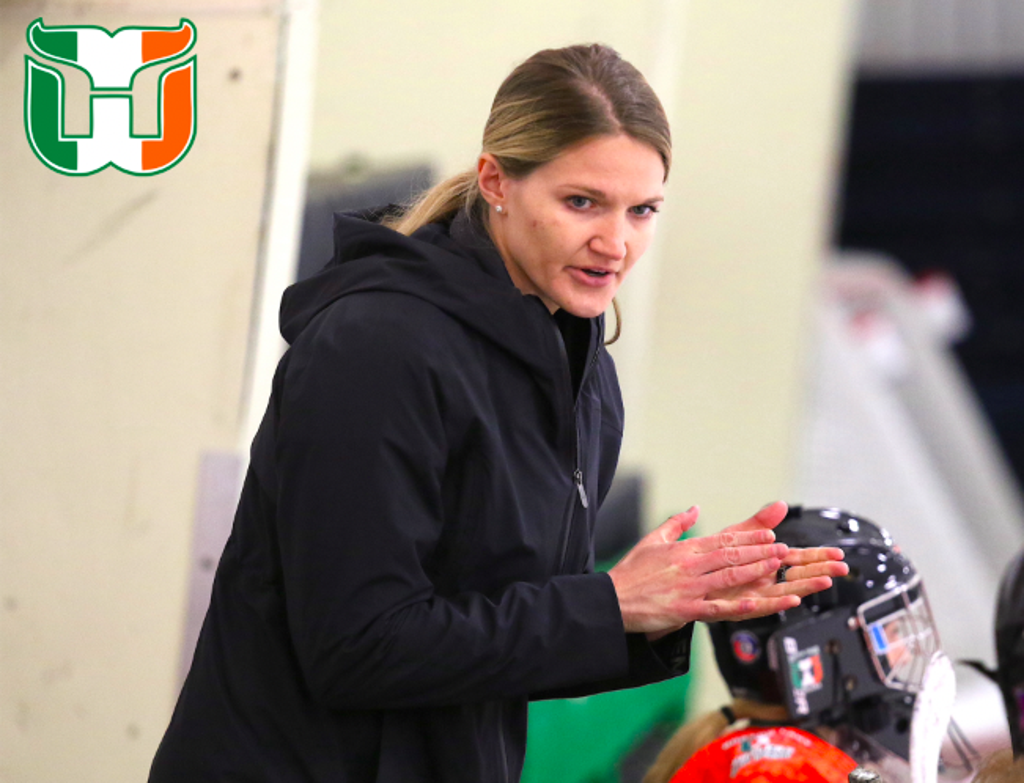 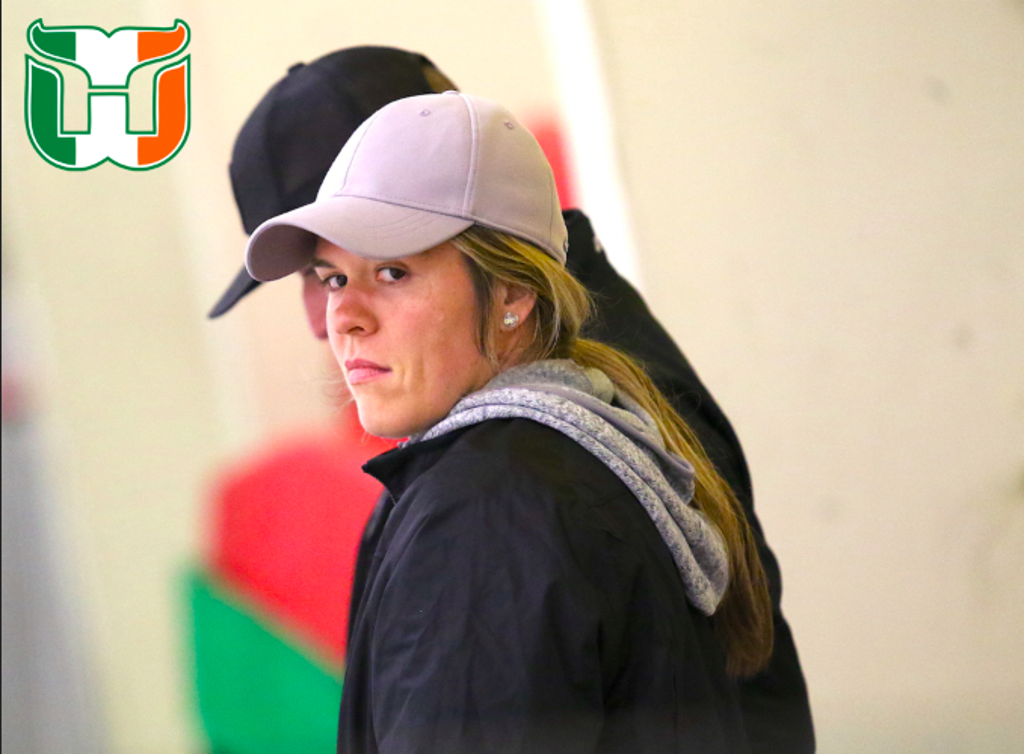 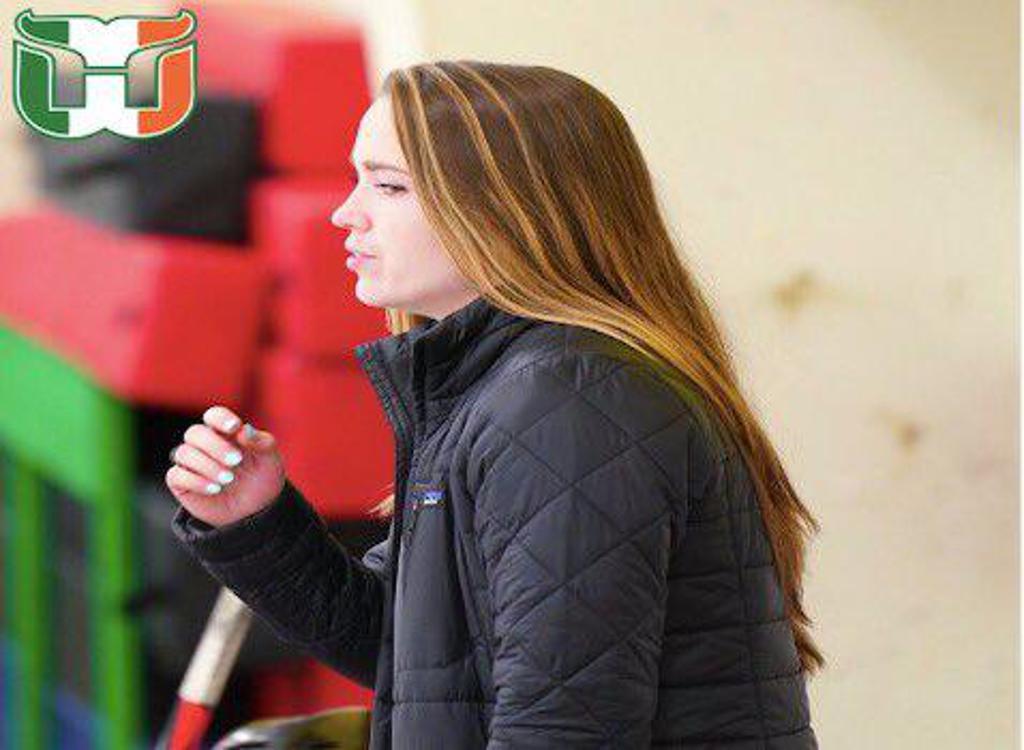 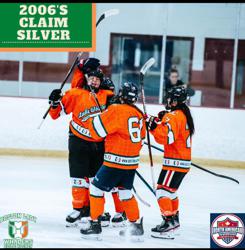 The Boston Lady Whalers 2006's began the event shorthanded on the first day, falling to Team Minnesota in the opener, but once the troops all showed up the group began firing on all cylinders.

After dropping their first battle of the weekend, the 2006's pieced together three straight wins - getting the best of the Western Selects, Team North America, and Team WestCan - earning themselves a rematch with the powerhouse Team Minnesota in the finals.

In a chippy back and forth game that was knotted at 3-3 for a while, Minnesota squeaked a goal in with under 6 minutes remaining and sealed things with an empty netter. 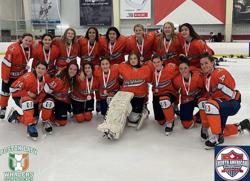 Boston Lady Whalers 2007's Earn the Bronze Medal at the 2021 NAFE Showcase in Blaine, MN after a 5-1 Win over Team WestCan

The Boston Lady Whalers 2007's had a great weekend with just a few stretches of time that we needed to be better during that ended up costing us.  After a big first game win over Team North America 9-2, Grace Morin was named the MVP of the first game - watch her post-game interview by clicking here!

The 07's came back on Day 2 and got edged out in a hard-fought battle by a score of 3-1 to a loaded Western Selects team who tucked an empty netter late.  After the loss, it was evident that we controlled our own destiny in that the team needed to beat both Team WestCan and Team Minnesota in order to advance to the Finals for another crack at the Western Selects.  In a game in which we let the other team hang around for too long, ultimately they made us pay the price with a goal to send the game to 4-3 with under a minute to go; which is how the score would remain.  Contribution was evenly spread amongst the roster, and the final two games were split, including a 5-1 win over Team WestCan to earn the Bronze Medal! 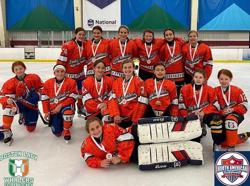 The Boston Lady Whalers 2009's got their first crack at national and international competition this past weekend and they did a great job!

The group split the Round Robin sector of the event with wins over Team WestCan and Team North America, and falling to Team Minnesota and the Western Selects.

When the dust settled, the 2009's were just barely edged out of qualifying for the Gold Medal game by one goal in the three-way tiebreaker.

The team ended up avenging an early tournament loss to the Western Selects by defeating the group 4-3 for the Bronze Medal.  The offense was paced all weekend by Mia Daley (Islanders HC) who led the entire tournament in points, as well as Isabella Gionta (Rochester Jr Americans), Ella Ketring (Roseau MN U12), and Madeline Carey (Boston Advantage).  The defense was anchored by Lily Brodsky (LI Gulls) & Chloe Crabtree (Boston Advantage).  Good work girls! 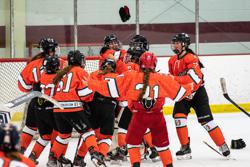 The Gold Medal-winning Boston Lady Whalers 2008's came into Minnesota with a 'business-trip' mentality in mind, and that was evident from the start.  In the opening game, the 08's handled Team Minnesota with a 6-1 win that was much closer than the score showed.  Christina Scalese (Groton School) was named MVP of the first game, and was interviewed afterward here.

Game 2 featured the 08's cruising to a 6-2 win over the Western Selects.  The game was a battle for the majority, and then the scoreboard opened up a bit.  Mary Derrenbacher (Carolina Jr Hurricanes) was named MVP of Game 2.  Game 3 was all offense, and it was poured on heavy - as the BLW 08's took down Team North America by a score of 13-1.  MVP of Game 3 was Mary Murray (Boston Advantage).

In Game 4, the 08's came out flat and were tied with a scrappy Team WestCan group 1-1 at the end of the end of the first period.  Team WestCan would score two quick goals right off the bat in Period 2, and really challenged our girls to battle back and climb out of the hole they dug themselves into.  But they were up for the task, and outlasted Team WestCan at the final buzzer by a score of 6-5 to finish Round Robin with a perfect 4-0 record.  Ava Decourcey (Mass Spitfires) won MVP honors in Game 4.

The Championship Game would feature a rematch with Team Minnesota - who had some seriously talented players and our girls knew that it would be a war.  Kaylee Mandeville (Mass Spitfires) got things started with a blast from the point, which was quickly followed up by a beautiful tic-tac-toe pass from Sofia Nardelli (Mass Spitfires) to Scalese behind the net, out front to a streaking Emma Cerruti (Boston Advantage) who blasted it through the back of the net to close out Period 1 with a 2-0 lead.  Kylie Amelkovich (Shattuck St. Mary's) had a terrific solo effort to start things off in the second period, scoring unassisted on a ripper of a snapshot.  Not more than 3 minutes later, Cassidy Lobisser (East Coast Wizards) had one of the best shifts of the tournament - capped off with a beautiful back-hand top shelf shorthanded goal to separate the teams by 4 goals.  Later in the period it was Nardelli who poked and fought to bang in a loose puck out front on a shot taken by Scalese - Ava DeCourcey registered the other assist.  Team Minnesota would bury two late goals in the third period, but that wasn't enough as the Boston Lady Whalers 2008's held on for a 5-2 win and a Gold Medal at the North American Female Elite Showcase!

Christina Scalese was named the Tournament's Most Outstanding Forward and Ava DeCourcey was chosen as the Tournament's Most Outstanding defender, and were awarded custom wrist watches as a gift, while Mary Derrenbacher finished tied for the tournament lead in points.  Ava DeCourcey was interviewed after the Championship Game victory, and that can be found here.

The Championship Game was recorded and broadcasted by YouthHockeyHub with a play-by-play broadcast and can be found and watched on-demand by clicking here. 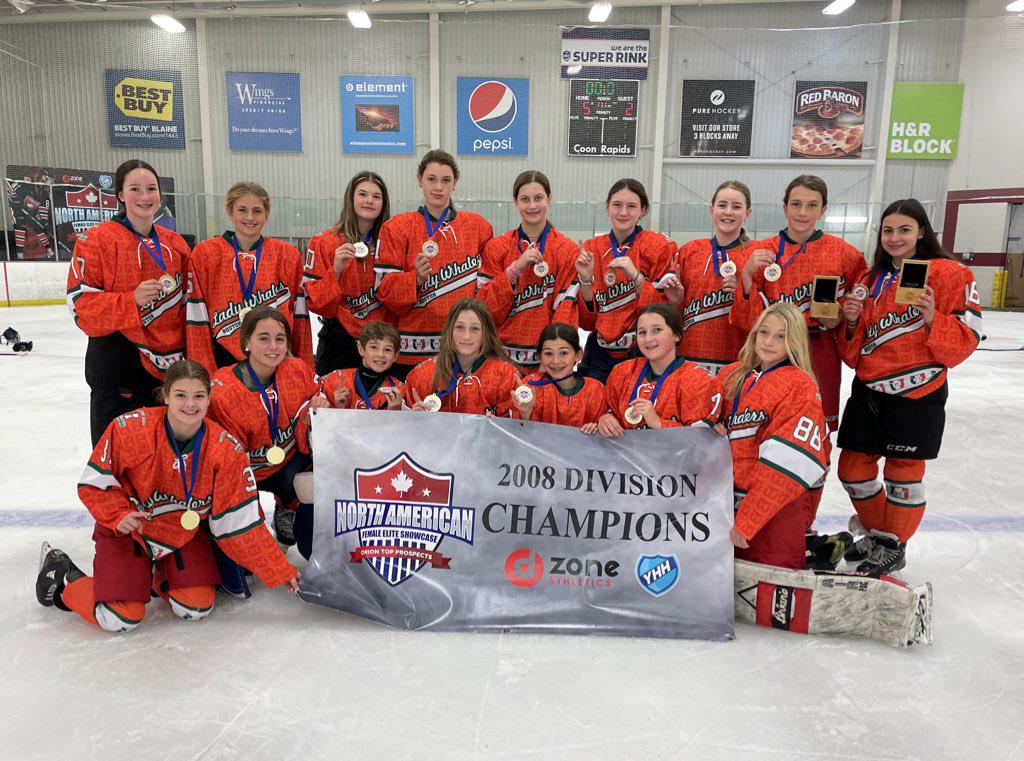 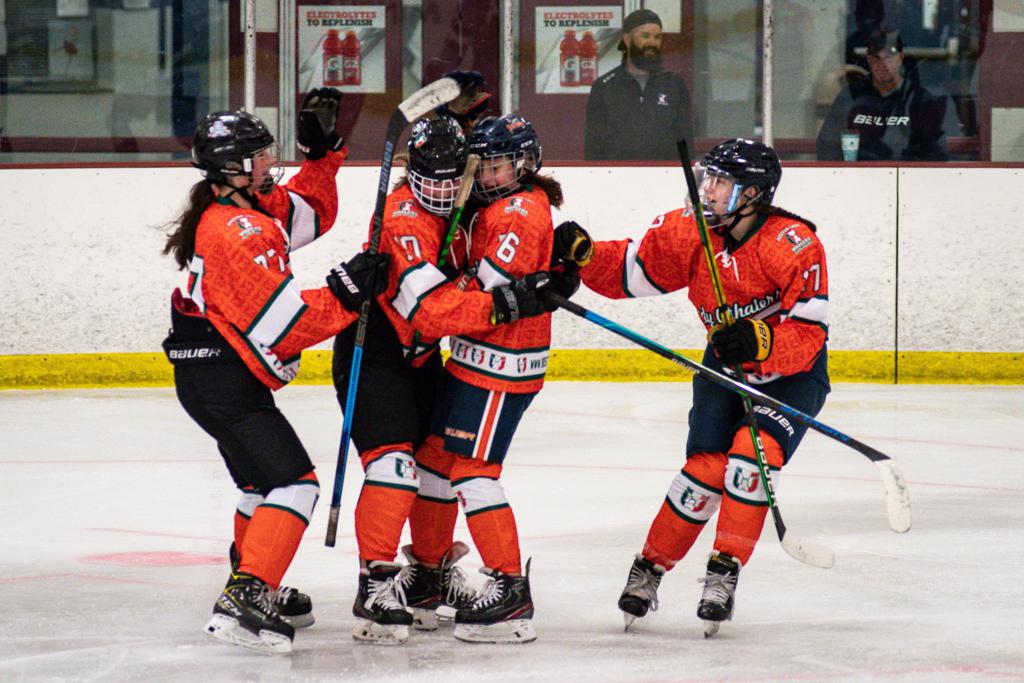 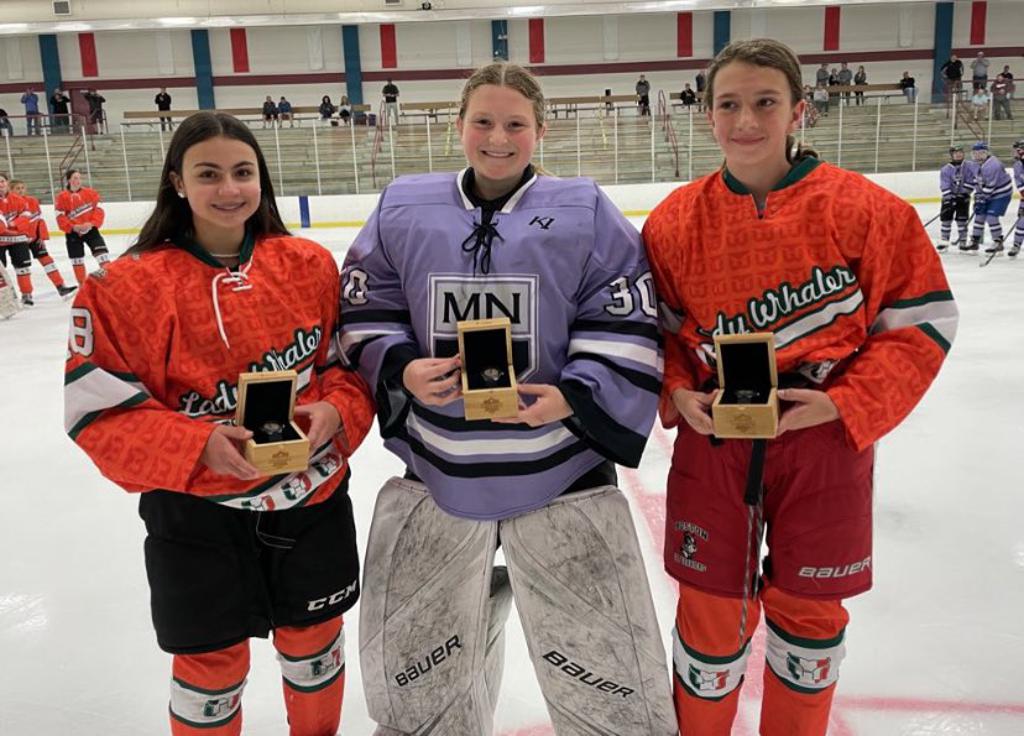