Boston, MA -  The Boston Lady Whalers program is excited to continue adding valuable pieces to our unrivaled staff of women who have played the game at the highest levels - and are thrilled to announce that U.S. Olympic Gold Medalist, Hannah Brandt, will be joining the staff effective immediately.

“We are ecstatic to welcome Hannah Brandt to our coaching staff.  Hannah’s accolades as a player on the ice, and a person off of the ice, surmount her stellar reputation in both fashions.  We are thoroughly excited to have Hannah's knowledge & communication ability, coupled with her personal playing experience help guide our Boston Lady Whalers players and families through the next few years as they pave their own paths & next chapters. Hannah will join our teams in Blaine later this month at the ORION Series’ North American Female Elite Showcase - and will be a large part of what we are building moving forward.   We are overly excited to have her behind the bench in the orange and green", - Dana Trivigno.

"As we expand our female program, we will continue striving to be the industry's leader in pairing our players with the most accomplished female hockey players/role models on the planet as their guiding mentors.  Today is an exciting day as we welcome Hannah Brandt to our staff.  Hannah's accomplishments as a hockey player exceed those of her male counterparts who have won the Stanley Cup - it's truly admirable what she has accomplished thus far in her career as an athlete.  The Boston Lady Whalers program has always prided itself on having our top young female players being guided by women who have tackled the highest hurdles and largest accomplishments in the sport, and not having "another Dad behind the bench". Having Hannah on board as we grow and expand our offerings is instrumental, and I'm personally appreciative of her willingness to be a part of our girls' development." - Mike Cusack 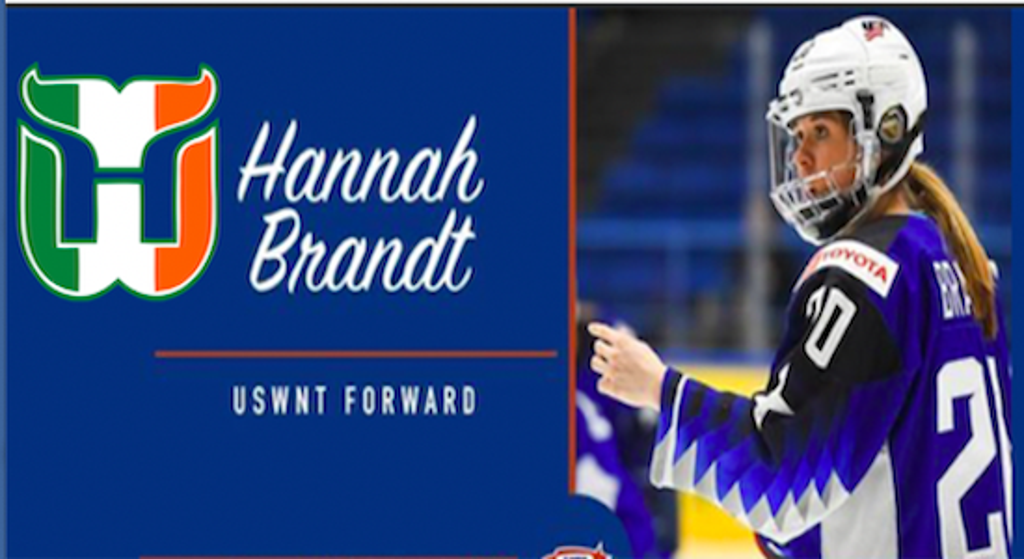 Get to know Coach Hannah a little better by watching this short video of her skating with the NHL's Minnesota Wild as our coaches and their colleagues continue to break down barriers!

To read more about Coach Hannah, and her countless accomplishments, please see the bullet points below:

Initially named to team roster in March 2021, tournament has been postponed to August 2021

Played four seasons at the University of Minnesota (WCHA):

USCHO.com Rookie of the Year

All-USCHO.com Second Team and WCHA Rookie of the Year