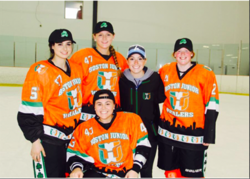 Boston, MA - The Boston Lady Whalers are excited to welcome home Danielle Doherty, who will serve as the program's Associate Director effective immediately.

A native of Newton, MA, Danielle currently coaches both ice hockey and field hockey at Lawrence Academy, where she starred in both sports as a student athlete herself in high school.  She grew up playing her youth hockey for Assabet Valley, and was a member of back-to-back National Championship teams in 2007 and 2008.  Upon graduating from Lawrence Academy, she earned a scholarship to Boston College where she was a member of some of the winningest teams in program history under coaches Katie King Crowley and Courtney Kennedy.

"Danielle has always had a passion for teaching the game, and she does so at a highly effective level.  I am very excited to have Danielle back on our staff, and I think our players will benefit greatly from her guidance", said General Manager Dana Trivigno.  "Danielle was an integral member of our inaugural staff in 2015, and will play a vital role in the growth and advancement of our program moving forward", added Mike Cusack.

In addition to her role as Associate Director, Doherty will serve as Head Coach of the 2010 Elite Team as well as coaching and overseeing our U19 & U17 Elite Showcase teams.  Danielle has coached and played at nearly every level of hockey, and her well-rounded experience coupled with her track record of advancing players to the NCAA level will be instrumental in helping our players further their careers.  Danielle will be involved both on the ice and behind the bench at all levels of the program, and will serve as one of our on-ice Lead Instructors.  To view our 2021 Boston Lady Whalers coaching staff, please click here.